The route development forum for Africa
Accra, Ghana ï 16 - 18 July 2018
Routes Africa brings together top-level speakers from across the sphere of aviation to discuss the most pressing issues facing the industry.
Will the Single African Air Transport Market agreement enable large airlines to emerge and dominate the industry? How can the regionís
airlines tackle the challenges faced by aging infrastructure and rising oil prices? Gain actionable insight and update your industry knowledge
during the Routes Africa conference programme.

In 2017 World Routes will take place in the vibrant city of Barcelona, the capital of Catalonia. We would like to invite you join the face-to-face meetings that shape the world's future air services...

Routes Americas is the essential event for all aviation based companies who wish to conduct business to, from and within the region. Bringing together a range of airlines, airports and tourism authorities...

Routes Europe is the largest regional gathering for all aviation based companies who wish to conduct business to, from and within the European region. Bringing together a wide range of airlines, airports and tourism...

Next year will see the 21st World Route Development Forum head to Africa for the first time when the event comes to the coastal city of Durban.
As World Routes 2014 drew to a close, this yearís hosts Chicago Department of Aviation and Choose Chicago officially handed the baton over to the Province of KwaZulu-Natal, South Africa.

ìWe are the most popular tourism destination for all South Africans and more international visitors are now sampling our attractions every year. Meanwhile, Durban is South Africaís premier port, handling more than 80 million tonnes of cargo a year, and the region is recognised as the countryís biggest manufacturing hub.î

Mabuyakhulu believes that hosting the event will further assist the province in securing more direct air linkages with the rest of the world, which he sees as ìessential for accelerating the regionís radical economic growthî, especially in the tourism sector.
ìWe are very fortunate to have leaders who understand that when you pull together, you have a far greater chance at success; that has been the driving force behind our achievements,î he added.
King Shaka International Airport is a brand new multi-billion rand investment that opened in May 2010, just ahead of the FIFA World Cup football tournament. The airport, along with its adjacent industrial development zone, the Dube TradePort, provides world-class multimodal transport and trade logistics that is enhancing the countryís intercontinental passenger travel and freight transfer.
Noting that conservative projections put African growth for the next 20 years at over 5%, he hinted: ìWe are involved in some very intense negotiations with a number of airlines at the moment and we are hoping to have some new route announcements either before or during World Routes 2015.î
ìWorld Routes is the equivalent of the World Cup of Aviation, so our hosting of the event definitely adds a new dimension to our efforts in developing routes.
ìWe want delegates to know that we are ready to welcome them: Durban is ready, KwaZulu-Natal is ready and Africa is ready; we look forward to welcoming you next September,î Mabuyakhulu added.

The 8th Routes Africa will take place on 7-9 July 2013, Kampala, Uganda and is hosted by Civil Aviation Authority of Uganda and Entebbe International Airport.

Routes Africa is the key event for Airports, Airlines, Tourism Authorities, Policy Leaders, Keynote speakers and exhibitors to meet, do business and plan for the future.

The annual networking gathering brings together more than 250 key players in the airline and airport industry from across the African region and beyond for strategic networking on air service development.

Uganda, which is widely known as the Pearl of Africa, has a fast growing tourism sector with an annual growth rate of 21% on average, contributing 24% of the total foreign exchange earnings. Domestic tourism has grown by 50% over the past 10 years.

Uganda is an investment destination especially after the discovery of oil in Uganda. This has greatly boosted passenger volumes through Entebbe International Airport.

We look forward to seeing at Routes Africa, Kampala, Uganda.

Routes Africa will bring together route development professionals from across Africa, the Middle East and beyond to discuss the latest developments within the region and establish potential for new air traffic routes to, from and within Africa.  This annual event is the only network development forum for the entire African region and, this year, will build on the successes of previous events.This year's event, which is hosted by the Seychelles Tourism Board in partnership with the Seychelles Civil Aviation Authority is expected to attract up to 150 delegates including around 30 airline network planners.

Welcome to World Routes 2012 in Abu Dhabi. The future is here. And in more ways than one ñ the 18th World Route Development Forum is the largest global event of its kind, determining the future of air services; while Abu Dhabi, capital of the United Arab Emirates, is one of the most forward-looking, centrally located and easily accessible cities on Earth. Hosted by Abu Dhabi Airports Company and supported by official carrier Etihad Airways and Abu Dhabi Tourism Authority, the 2012 event is targeted to attract over 2,750 delegates from more than 80 countries. It also marks the first time the event has returned to a previous host city. Back in 1996, Abu Dhabiís downtown Hilton Hotel was the setting for one of our first World Routes events. 16 years later, delegates will be able to witness for themselves the immense changes that demonstrate how the cityís future as a world class destination is taking shape, and experience firsthand the wonderful Arabian hospitality of Abu Dhabi. 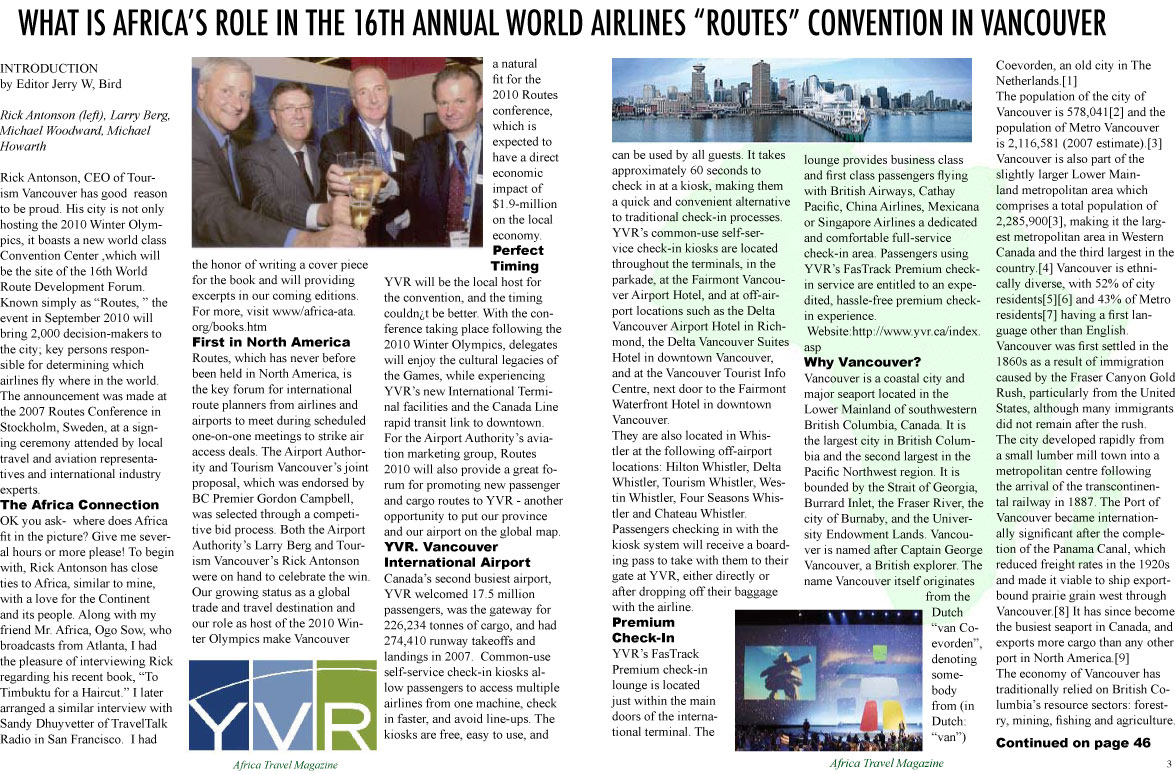